I have been working with foldables this year.  This is one that I came up with while working with the students on the concept of a number having both factors and multiples.

The foldable was created with small groups.  We only added the number before gluing the small center piece down.  Students wrote “Factors” on the top left flap.  We added “few” in the same color pencil.  Then students opened the flap and we wrote down the factors for their numbers. We started with 1 times the number, large enough that the product was shown as the center number.  I asked the students to pick an even number larger than 10. (I wanted to avoid any prime numbers for now).  Students worked together to figure out the factors for each of the numbers that the students selected.

We worked on the multiples as a whole-group mini-lesson that included using calculators for the first time this year.  Students were jazzed.  I modeled how to write out the first few multiples, along with the ellipses to indicate that the numbers continued on.  Students quickly recognized that the multiples was a clear growing pattern.  After students had listed at least 5 multiples, they checked their own work to see if their answers were reasonable.  They shared how different students evaluated if an answer was reasonable.  We then did a ‘gallery walk’ of the work followed by verifying at least two other projects before returning to their own project. 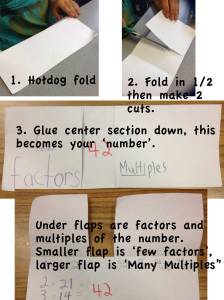